American Eagles are one of the most popular coins in both North American and the world. Produced and distributed by the United States mint, American Eagles have been incredibly popular since their inception in 1986. In the early days, Eagles were only made in gold and silver versions, though this changed in 1997 when Platinum American Eagles were released. 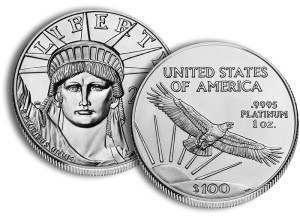 Just like any other type of American Eagle coin, the platinum version comes in a variety of different sizes. As is the case with any other coin on the market today, the 1 ounce version is the most popular, but it is also one of the priciest so it is not always an option for all collectors and investors.

Besides the 1 ounce Platinum American Eagle, there are three other versions including the 1/10th, 1/4th, and ½ ounce varieties.

Though the American Eagle is a piece of American history, what makes it really valuable is the amount of platinum actually present in the coin. Unlike Gold Eagles which have a purity level of about 92% gold, the Platinum Eagle is comprised of 99.95% platinum. This means that there is more platinum and less filler metals in the coin, and thus the coin is more valuable.

The American Platinum Eagles have been in production for about ten fewer years then its gold and silver counterparts. The world became incredibly interested in gold and silver towards the middle of the 1980s, and by the mid-90s worldwide interest expanded into additional precious metals such as platinum.

Though interest in platinum bars and coins picked up in the early 90s, it was until 1997 that the Platinum American Eagle was released. The amount of Platinum Eagles minted varies a bit from year to year as in the inaugural year there were a little over 170,000 coins (all sizes included) minted where only a year later total mintages of non-proof Platinum Eagles was bumped up to over 240,000. Mintages have not always increased over the years as in 2000 fewer than 100,000 non-proof Platinum Eagles were minted.