Australia, like many other countries, began dipping their toes in the production gold coins in the late 1980s. After Perth Mint, Australia’s main minting organization, released its Gold Koala coin in 1987, they immediately realized that they were on to something. The Gold Koala flew off shelves and was sought after by investors from all over the world. Building upon early successes, the government of Australia decided, only a year after the Gold Koala was introduced, that silver and platinum coins were necessary. 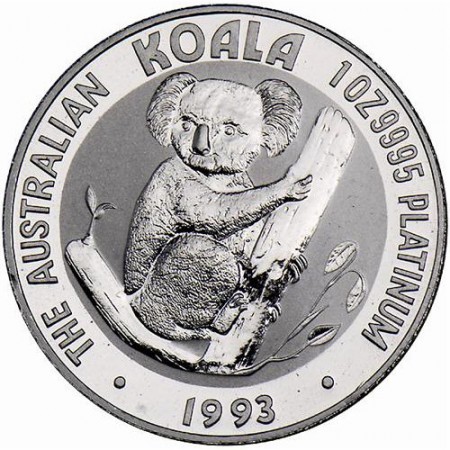 Nowadays the Koala coin series is one of the most popular in all of the world and especially in Australia. The purpose of this article is to introduce you to the different sizes of Platinum Koalas, talk about what makes them valuable, as well as fill you in on any other information that might be useful in finding out more about these attractive coins.

When the Koala was first introduced back in 1988, the platinum version of the coin could be found in 4 different sizes; 1/10, ¼, ½, and 1 ounce. These coins were incredibly popular from day one, and cashing in on their popularity was none other than the government of Australia. Nowadays the coin can be found in sizes as small as 1/20 ounces to as large as 1 kilogram.

As you can plainly see, few other bullion coin series offer the array of coin sizes that the Platinum Koala set does. No matter if you are a big time investor or just getting started, the Perth Mint of Australia is able to suit everyone’s needs with the Koala series.

As any investor will tell you, it is not the face value of the coin that determines its actual value, but rather the amount of metal present in it. This is the reason behind why you see coins with face values of $20 selling for prices that are much more than that.

You will find coins having purity levels from 50% all the way up to 99.99%, and obviously the closer to 100% you get, the more valuable the coin is. Platinum Koalas are made of 99.95% platinum, which means they contain almost no filler metals, a good sign for investors.

The Platinum Koala series has existed since 1988. Like many other countries around the world Australia began the mass production of precious metals coins during the late 80s and early 90s. These coins have varying mintages depending on the year, as the Perth Mint seems to have no real rhyme or reason as to how many coins they produce in a given year.

More recently, mintages have grown to include the many different, newer sizes of the Platinum Koala and thus annual mintages have risen. While some of the more obscure sized Koalas may be difficult to find, the one ounce version is widely circulated and while it is in great demand by investors, they are still not too hard to find.